Years ago, I was working for a promotional supply company and tasked with sourcing keychain versions of an oddly-shaped mini computer (it was a computer kind of in the shape of an “X”). This was a little before the computer actually came out and about two years before “big” manufacturers started pushing micro PCs.

It should have been a big hit.

Unfortunately, this story doesn’t have a happy ending. END_OF_DOCUMENT_TOKEN_TO_BE_REPLACED

Your Business will Fail Without this “Three-Step Marketing Ladder”

Today, marketing genius Seth Godin (arguably one of the most influential people in the rise of content marketing ideologies during the last few years) posted a great breakdown of the marketing sequence.

His post explains the differences among each rung of this ladder, but there’s something I noticed… END_OF_DOCUMENT_TOKEN_TO_BE_REPLACED

Pretty groan-worthy, right? There are some things they did right. Here’s a breakdown of what your marketing team can learn from this billion-dollar company’s profoundly dumb video script. END_OF_DOCUMENT_TOKEN_TO_BE_REPLACED 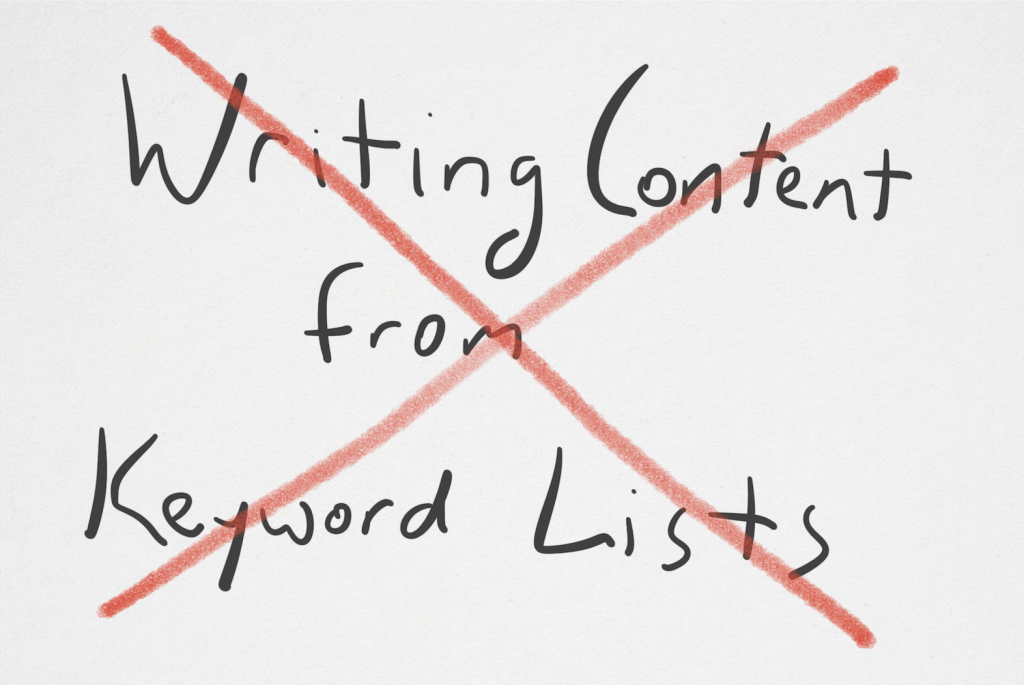 Back in the day, when I began writing web content seriously, a common practice was for my clients to send me long lists of keywords and have me blindly write articles based on the list.

As long as I used the keywords (and any associated secondary keywords) enough times in the article, the content almost didn’t matter.

From the current internet marketing perspective, that practice sounds ludicrous. Good content marketing is all about sharing something that delights readers and brings a degree of happiness into their lives.

But that kind of “content farming” I used to do? It’s come to (rightfully) be seen as toxic and wasteful.

So why are so many content marketing agencies still doing it? END_OF_DOCUMENT_TOKEN_TO_BE_REPLACED

Customers Only See the Final Product, Not the Process

There is a belief most people hold which is that comedy writing is a simple process. A comedian has an idea, scribbles it down on a piece of paper and then performs it in a room and everyone laughs. That great pieces of comedy like Eddie Izzard’s Cake or Death sketch were just written and suddenly became funny. This is a lie.

…But really when you watch a comedians set on Live At The Apollo or see their latest show what you’re witnessing is the final form of an evolved piece of material that is probably nothing like the original scribblings in their notebook.

To be able to evolve their material comedians need you. Audience. Since, more so than almost any other performance, comedy is a dialogue. I do not explicitly mean “banter” with the front row, but the simple rhythm of joke-laugh-pause-continue that a comedian practices at these gigs.

Only by gigging around their material and tweaking it and moulding it does material become truly hilarious. The fat is trimmed and the structures within the bit reinforced.

Wow! There’s a lot here that I love and that applies directly to how you can overcome some of the fears stopping your business from improving. I’ll do my best to break it down a bit.

No One Cares About Your Process

Something I’m a little self-conscious about is “growing in public” — that is, gradually changing my writing style or website layout or marketing strategies. A little voice in my head is worried someone will notice what I’m doing differently and call me out.

“Hey! You changed the font you use for widget headings!”

“Hey! Your email template is different!”

“Hey! I see you testing different variations of your landing page copy!”

Ultimately, what I think I’m afraid that little voice will say is…

“Hey! You’re trying to do something different, and that’s not okay!”

I sometimes fall into the trap of worrying what potential clients or customers will think if they catch me refining my process. (Maybe that’s leftover trauma from attending middle school in LA, where even the slightest change in how you dress can lead to ridicule.)

But it’s not just me who’s worried “someone will notice.” Many of my clients second-guess the changes their conversion rate specialists or designers want to make to their marketing efforts. I once heard the boss of a million-dollar company say, “We don’t want to test any differences on our home page because we don’t want customers to go, ‘Wait, what was that?'”

The fact is, you are human, and your business reflects that humanity. Instead of fighting it, embrace it. We live in an age of transparency due to social media and email leaks, so your customers are conditioned to respond positively to seeing the human side of your work.

No one will care if they can see you working out the best way to deliver goodness to your customers.

We Can’t See the Process of Others

The legendary story of Beach Body’s P90x product is a great example of how constantly tweaking and refining gives the path to success.

The short version is that the wildly successful information you see blared on late night television is the result of millions of dollars in testing. The first version of this infomercial bombed. So did the second and third. But somewhere down the line (and millions of dollars later), Beach Body hit it. They finally discovered the version of their infomercial that exploded their sales.

But do you know this when you’re watching their infomercial while flipping channels? Nope. You’re only watching the latest variation (and likely getting entranced at how good they are at delivering their message).

Successful product marketing often looks much easier than it really is. That’s because we only see the newest (and probably best) version.

What we don’t see is the process every single marketer has to go through: conception, mockups, testing, revisions, more testing, more revision, etc…

No one is such a genius he or she doesn’t need to follow this process.

Don’t let your vanity get the best of you and feel you’re somehow the exception.

If you’re reading this, though, I’m guessing you don’t feel you’re above that. You’re likely smart enough to embrace the subtle changes that gradually draw you closer to success. Right?

Have a nice weekend.

Want to Hire a Copywriter That Delivers Results? Check Out This Must-Read from the Son of Legend Gary Halbert

In this world of eLance, oDesk, and other content mills, it’s hard for some business owners to justify the much higher cost of a good content writer.

(I once had a potential client tell me “$0.02/word is WAY too much for this project.” Unsurprisingly, he always seemed to be in need of a new writer since his old ones had a habit of quitting.)

With a smart content marketing strategy, paying for quality writers is the only reasonable decision. But how do you justify spending several hundred dollars on a single article (and several thousand on a single piece of copy, such as a landing page)?

Kevin Halbert, the son of the late-great Gary Halbert, is a fantastic copywriter in his own right. In this lengthy piece, Kevin describes why any serious business owner should be willing to pay handsomely for a great copywriter – and why “discount” copywriters (and content writers) should be avoided at all costs.

I’ve only quoted a sample below, but if you ever have the need for a copywriter, please read the entire letter at this link. It’s long, but worth the read. END_OF_DOCUMENT_TOKEN_TO_BE_REPLACED